My highlight of our trip to the UK in 2006 was a visit to the North Wales town with the longest place name in Britain. That’s me at  Llanfairpwllgwyngyllgogerychwyrndrobwllllantysiliogogogoch Station.

I’ve wanted to write a poem about it since penning one about Lake Chargoggagoggmanchauggagogchaubunagunggamaugg, the  longest place name in the US. That one took me four months.

(Part III will be even harder: paying homage to the world champ  Taumatawhakatangihangakoauauotamateahaumaitawhitiure-haeaturipukakapikimaungahoronukupokaiwhenuakitanatahu out the back of Waipukurau.)

The Welsh poem turned musical when I realised that the name could be made to scan with a beautiful Welsh folk song we used to sing at Hutt Intermediate.

A STATION IN WALES

A station in Wales
whose name never fails
to generate gales
of laughter and shock
is one they call Llanfair-
pwllgwyngyllgogery-
chwyrndrobwyllllan-
tysiliogogogoch.

CHORUS:
Long names there are many
like Abergavenny
and Paekakariki
and Vladivostok,
but none quite like Llanfair-
pwllgwyngyllgogery-
chwyrndrobwyllllan-
tysiliogogogoch.

A sign at this station
provides confirmation
of a Welsh fascination
with gobbledygook;
it reads simply Llanfair-
pwllgwyngyllgogery-
chwyrndrobwyllllan-
tysiliogogogoch.

Long names there are many
like Abergavenny
and Paekakariki
and Vladivostok,
but none quite like Llanfair-
pwllgwyngyllgogery-
chwyrndrobwyllllan-
tysiliogogogoch.

No station in Britain
takes longer when written
or’s harder to fit in
its stationery,
which does seem most unfair
to the good folk from Llanfair;
no wonder all of those who live thire
call it Llanfair PG.

Long names there are many
like Abergavenny
and Paekakariki
and Vladivostok,
but none quite like Llanfair-
pwllgwyngyllgogery-
chwyrndrobwyllllan-
tysiliogogogoch.

Now here’s how you pronounce it:

And here’s what it means:

The church of Mary in the hollow of the white hazel near the rapid whirlpool and the church of Tysilio by the red cave.

And here’s that again in the correct Welsh word order: 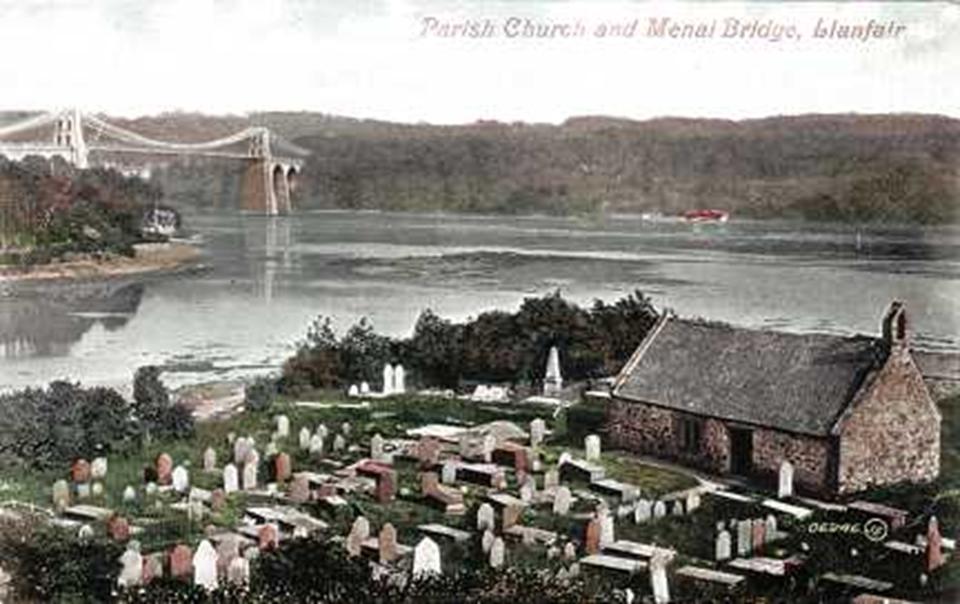 As St Mary’s would have looked in the 19th century when the town’s name was lengthened from Llanfairpwllgwyngyll as a publicity stunt.

Surely the longest car dealership sign in the world. The village is a signwriter’s paradise.

One day I hope to sing the song there – via a poetry recital at Lake Chargoggagoggmanchaugaggogchaubunagunggamaugg.

For now, I must figure out how to make a You Tube of the song.

If the NZ Poetry Society folk don’t mind me extending the definition of poetry a tad, I’ll sneak it into my guest spot at the Thistle Inn on Monday 15 February.

(7.30pm upstairs if you’d like silly poems and gobbledygook – or should I say goch.)

6 thoughts on “A song about Llanfair PG”