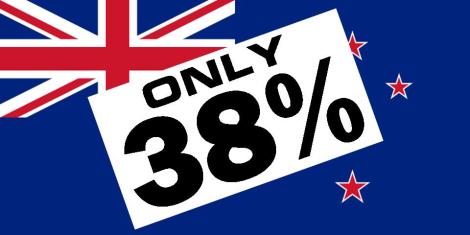 The flag debate which began on this blog has now exploded on to the front page of the Herald and exposed a real mood for change on Close Up.

That’s an astonishing result, as the last time I saw a survey more than 60% favoured the status quo.

I found it especially pleasing to see the silver fern almost tied with the incumbent on 37%, even though I’d vote for the present flag over the All Blacks ‘set of steak knives’ logo that was used to represent the fern.

The silver fern was far and away the preferred alternative symbol, with a Dick Frizzell Southern Cross flag (representing ‘others’) scoring 10%, the United Tribes flag 9%, and the Maori flag 6%.

Hone Harawira surprised me by favouring a silver fern on black design as the national flag, though ironically many white liberal make-believe Maori would happily adopt his tino rangatiratanga flag as their own.

Of course, the TVNZ survey was not scientific, being a self-selecting sample, but I was pleased to confirm my long-held view that the fern is the only realistic alternative emblem.

I’d now like to test Kenneth Wang’s and my fern against the All Blacks design, so stay tuned for another flag poll on this site.