Good to see John Key appears to be having a rethink.

John says the billboard is inaccurate. Really — which bits?

Does he mean iwi will no longer get

over the foreshore and seabed, and that all New Zealanders will continue to have

Because if he doesn’t, he should apologise to the Coastal Coalition, who are getting mightily sick of being painted as liars.

And if he does, then why is he going to the trouble of renouncing Crown ownership?

When all the fluff is stripped away, teacher unions exist so that:

In my book, that makes the PPTA the educational equivalent of a Big Tobacco lobbyist.

They know that a teacher’s ability to explain and fascinate is what determines whether or not a child learns.

They know that one boring teacher can kill hundreds of children’s enthusiasm for a subject forever.

They know all this. Yet they still turn out stomach-churning ads claiming that they care about children.

Well, this latest billboard surely confirms that they don’t.

Just when the National government is bringing some real-world standards to our increasingly dumbed-downed education system, what does this supposedly child-centred union do?

Now I’m told the dimming campaign is really about the government’s decision to relieve you and me of the burden of paying for other people’s hobby classes.

Hard to say. The billboard gives no clue. But no matter.

Never waste a crisis, as the saying goes. And a grievous (and possibly unprecedented) insult like this can certainly be parlayed into a crisis.

The Nats should grab this slur as the perfect excuse to smash the teacher protection racket the way Margaret Thatcher smashed the miners.

If you ever hear a unionist sounding plausible about how national standards will stigmatise children, remember: their sole interest in your children is to keep the worst teachers in front of them. 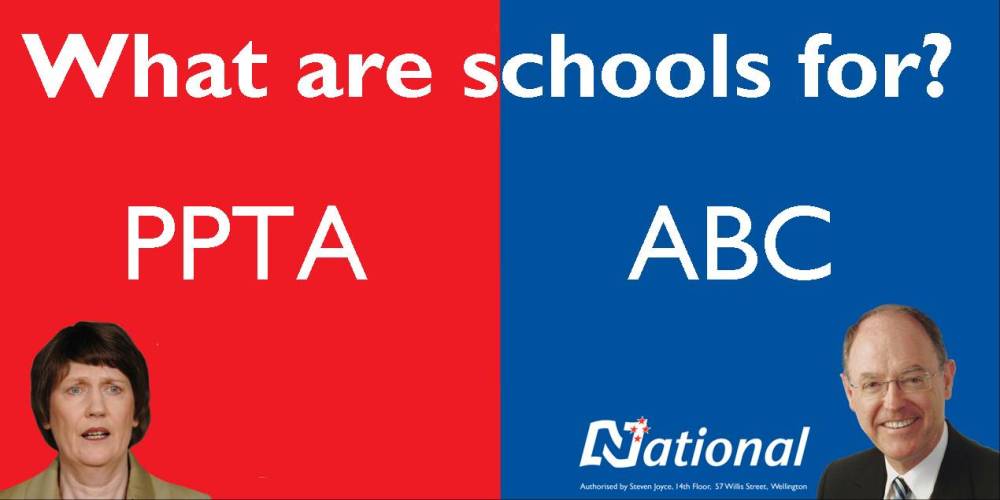 It was my favourite of the lot, but it never ran. Don Brash wanted it to, but others thought no one would understand what PPTA was.

I replied that the media would ensure that they soon did!

I think this billboard would have created a firestorm, which the teacher unions surely deserve.

It would have thrown the spotlight on the real wreckers of the New Zealand education system: unions that for decades have quite deliberately destroyed the futures of thousands of children by insisting that they be exposed to useless, boring, uninspiring teachers.

Let’s hope the latter-day Nats can summon up the guts to deal to these Labour-protected losers – and pay good teachers the six-figure sums they deserve.

(They just might too, as depowering the PPTA would be hugely popular with parents, students, business, and anyone who cares about New Zealand’s future.)