THE TOFFEE-NOSED VOICE OF CLIMATE SANITY,
WHOSE FORENSIC DEMOLITION OF WARMMONGERS’
LIES BLUNTED THE UN’S PLANS FOR A COMMUNISTIC
WORLD GOVERNMENT

Don’t get me wrong, I haven’t always been a global warming  sceptic. On the contrary.

I was so impressed by Al Gore’s movie I suggested to then-Opposition leader Don Brash that he make it his urgent mission to watch it.

The bit that stuck in my mind was Gore needing a cherry picker to reach the top of his ‘hockey stick’ graph of steeply rising temperatures.

This was Al’s dramatic way of showing that the globe was now  much,  much warmer than it had ever been before.

I was also moved by the plight of the polar bears, which Al said were  drowning because their iceberg homes were melting from under them.

And of the people of Tuvalu, who Al said were flooding into New Zealand as rising tides flooded their homes.

Al said a lot of things like that. And I believed him. Why would he lie?

Then friends started to tell me why. And to send me the evidence. Seems Al lies quite a lot. (Maybe because he’s well on his way to becoming the world’s first carbon billionaire.)

A lot of that evidence was exposed by the man you see above.

If you’ve been following the global warming debate in the biased left-wing New Zealand media, you’ve probably never heard of him.

If you’re Al Gore, you spend much of your time running away from challenges to debate him.

He calls himself Christopher Monckton, or Lord Monckton, or the 3rd Viscount Monckton of Brenchley, or just plain M of B, depending on his mood.

I call him a one-man peer review process.

One of the things the peer reviewed was Al’s movie. He found that it contained no fewer than 35 lies.

END_OF_DOCUMENT_TOKEN_TO_BE_REPLACED

Our intrepid friends Kim and Jon Chamberlain and family are just coming to the end of an 18 month odyssey in Uganda.

No, Kim and Jon are not missionaries or diplomats or freelance witchdoctors.

In fact, neither of them had a job at all when they arrived. Nor did they have anywhere to live, or schools for their children Jordan and Kira.

They just fancied having a family adventure, and chose as their destination one of the poorest countries on earth. (As you do.)

And sure enough, these incurable optimists have had the time of their lives.

Oh, apart from the odd problem with ants, bats, headless chickens, poisonous snakes, beggars, robbers, bribes, fatal road crashes, malaria, dodgy food, the absence of most goods and services, and their near-electrocution after the hot-wiring of their home by a none-t00-bright sparky-cum-plumber.

Kim is a writer and her blog is well worth a read – especially her battle with Ugandan bureaucracy as she tried to get a local driver’s licence.

I nearly fell of my chair when my cousin Graham Ansell’s face appeared in the One News review of the year’s events.

I knew Graham, Diann and family had a lucky escape from the Samoan tsunami, but I didn’t know his story had been filmed – or that he’d helped to raise $15,000 for the survivors.

(I even found his story on the BBC News site.)

END_OF_DOCUMENT_TOKEN_TO_BE_REPLACED

‘Tis the season for seasoning chickens. Here’s a new poem about one who was determined to go out on his own terms…

WHY DID THE CHICKEN CROSS THE ROAD?

“Why did the chicken cross the road?”
the chicken farmer cried.
The clairvoyant answered:
“To get to the other side.”
END_OF_DOCUMENT_TOKEN_TO_BE_REPLACED

In the 21st century, the New Zealand flag should not be a British flag, or a Maori flag, or an Australasian flag.

The symbol that best unites us is surely the ponga or silver fern, first worn  by the NZ Native Rugby Team of 1888.

But which silver fern is fit to grace our flag?

I believe the leaf must have a simple, timeless elegance. If I could draw, it wouldn’t have taken me 23 years to show you what I mean.

But only this year did I find a designer who could translate my vision of the perfect fern.

His name is Kenneth Wang, former ACT MP and owner of BrandWorks.

Twenty  years ago, Kenneth designed the winning poster for the Auckland Commonwealth Games. He was a joy to work with.

I told him I needed a smooth, flowing, classical fern. A few emails later, he’d produced exactly the design I’d had in my mind for 23 years.

Then, thanks to the miracle of PowerPoint, I set our fern against 141 different backgrounds.

I tried black and white, every shade of blue and green and teal and red – and every combination of stars, bars, panels and stripes I could think of.

I tried silver ferns and gold ferns and black ferns and white ferns, before confirming  that white looked best.

Among my six finalists below, I’ve tried to cater to every flag faction, from  sports buffs and nature lovers to traditionalists and Maori.

So now, please tell me which one you’d fly from your flag pole. Then vote in my flag poll. 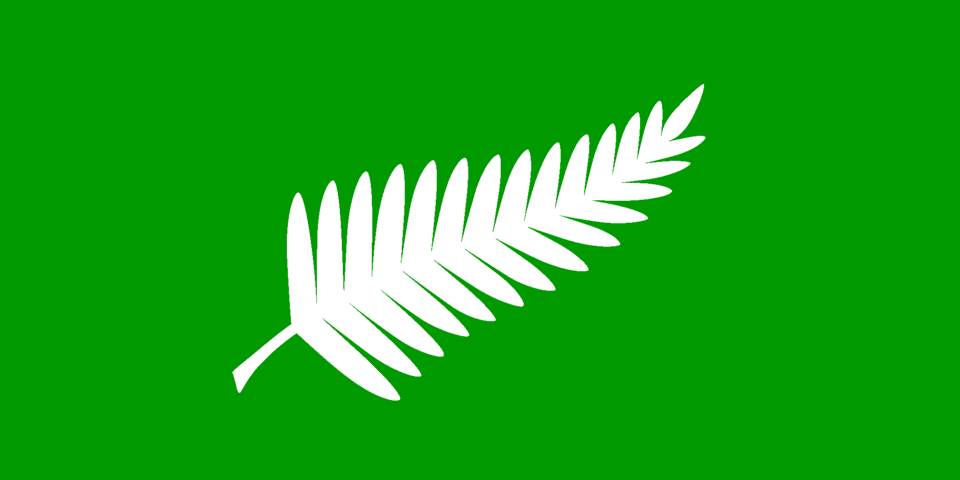 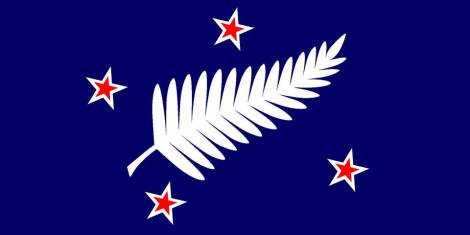 Thanks to Anthony Hubbard from the Sunday Star-Times for sparking this post by asking if I had any views on the flag.

Thanks also to David Farrar, who has said he’ll link to it. I’d assumed my right-of-centre mates would be hostile to this idea, and didn’t know David was a republican and big flag-change fan.