UPDATE: For those who are apparently still visiting this page in 2011, this post relates to the 2008 election. As a recidivist resigner (as Paul Henry called me in a recent interview), I thought I should make it clear that I have no plans to return to ACT in 2011 — and I imagine ACT has even fewer plans to invite me to. But they should think about running an update of this ad.

OK, OK, so it’s been harder for me to sit out an election than I thought. In the end I just couldn’t say no to a cause I believe in.

This, then, is the World Premiere of ACT’s new press ad. It runs in the NBR tomorrow. 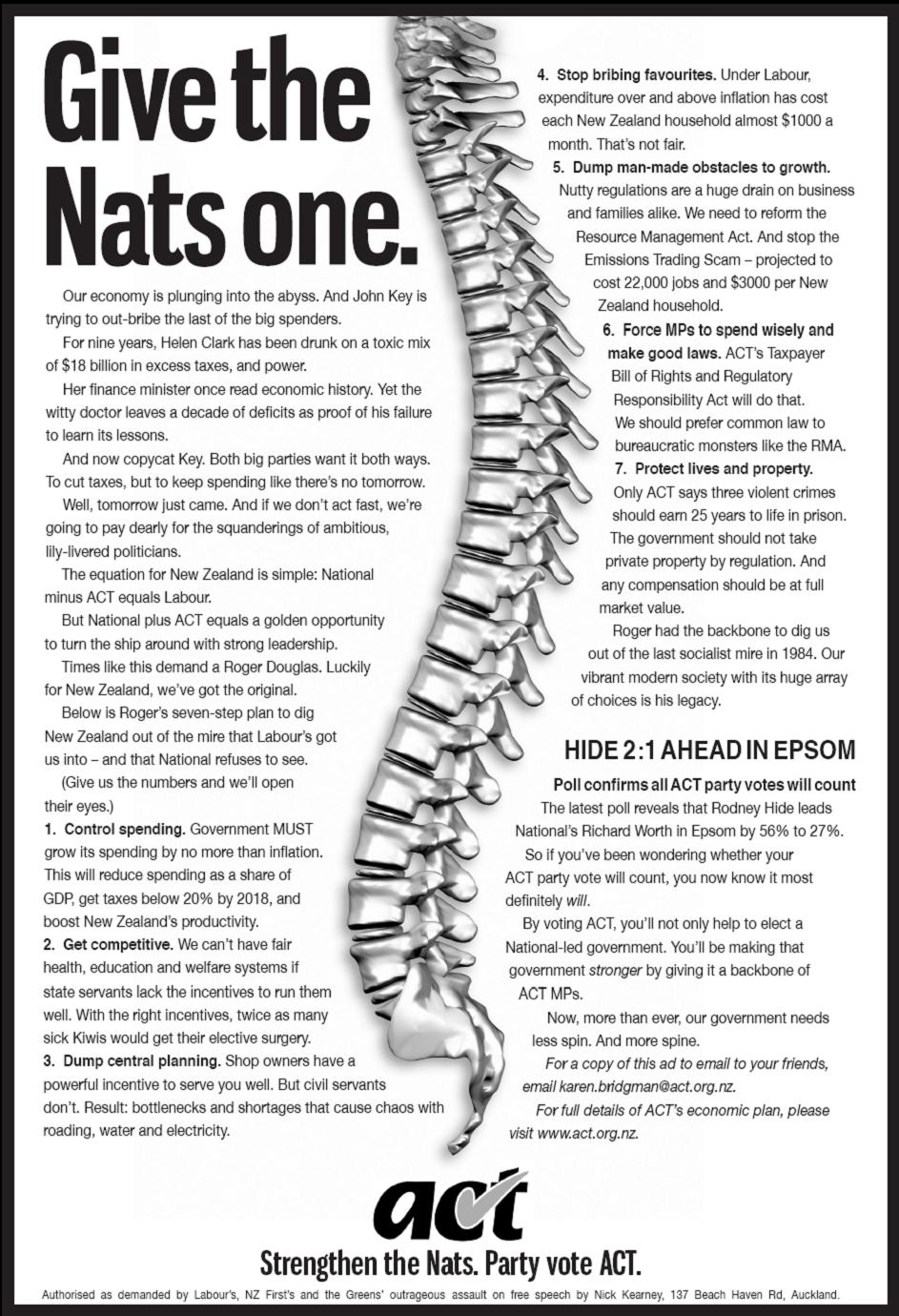 I think it sums up why we need ACT in these troubled times. I hope Rodney, Roger and John can find the money to run it more than once.

Stephen Franks rang on Friday to say we’re providing a lot of enjoyment to the centre right, especially with the Helen and Winston Trusts billboard. 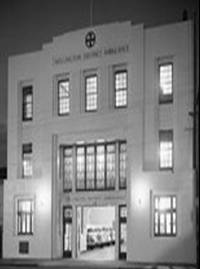 This turned into a drinks invite and a nice meal with Stephen and Cathy at St John’s Bar.

None of us had eaten there before, and all agreed that the fish dishes were exceptional.

I had been in the building before – on an outing from  Waterloo when I was a nine year old cub and St John’s was an ambulance station. 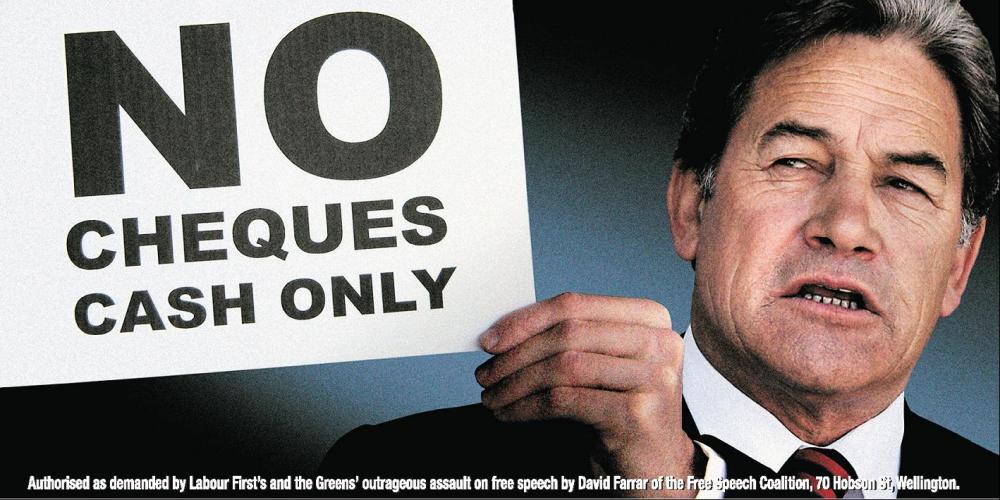 Our latest billboard should be up by now in Tauranga. David Farrar’s idea, executed by art director Mike Boekholt.

After filming the Media 7 show, the guests and crew retired to the bar at the comedy club where it was filmed.

Some hours after that, I retired further to the London-something-or-other pub next to my hotel for a beer, a sausages and mash, and the final overs of Team Vettori’s jittery victory in Chittagong.

So my relaxation was well advanced when a journalist from National Radio rang wanting my comments on an anti-abortion campaign involving the nuking of Wellington.

This just a week after the Aftershock doco where my home patch was levelled by an 8.2 earthquake.

(It occurred to me that, the odd cockroach aside, only one creature could survive such a twin pummelling. But he’d have to win Tauranga first.)

Then a few minutes even later, one of her colleagues rang seeking my reaction to Labour’s Two Johns attack ad.

Great, suddenly I was the late night go-to guy on all things advertising. I suspect Mike Hutcheson put them up to it.

Anyway, as this idea was obviously derived from the Soap  radio campaign I did for Labour in 1987, I was happy to discuss it. But not while that happy.

Fearing I’d sound like Muldoon the night he called the snap election in 1984, I suggested he ring back early the next morning, thus ending any hope of a well-earned sleep-in.

In the eventual interview on Morning Report , mustering all the sincerity I could fake, I did my best to give a reasonable impression of a person happy to be alive.

I thought it was oil we were supposed to be running out of, not punctuation marks.

Seems the dangling possessive is just the latest artefact to be restricted on Air New Zealand flights, along with cellphones, bomb jokes, knives that don’t bend,  laptops, liquids, legroom, and decent food.

As you can see from these four screenshots from yesterday’s Air New Zealand inflight quiz, the airline now has a zero tolerance policy towards apostrophes.

Why this possessive prevention programme has been mounted is not immediately clear.

Perhaps Air New Zealand see themselves as stewards, not just of our cabin ambience, but also of our linguistic environment.

Perhaps it fears that environment becoming polluted by overpunctuation.

Or perhaps it’s more worried about the legal ramifications of its quiz writers developing a bad case of POOS (Punctuational Obfuscational Overuse Syndrome).

Either way, Air New Zealand, it’s not on.

Punctuation marks are navigation aids. They help guide readers on their  flight path toward the destination of understanding.

You’re our airline. Please show more respect for our language. 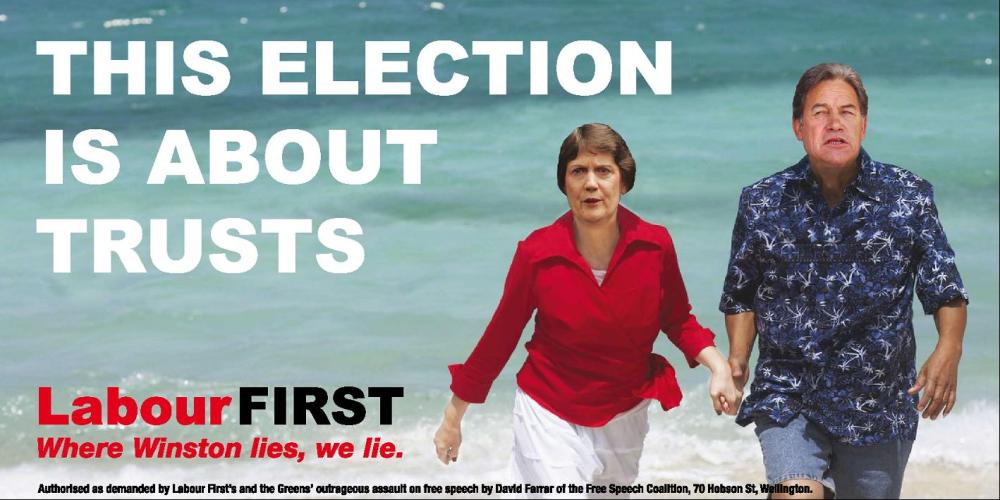 What began as an idle suggestion by me on Kiwiblog and a quick mockup by Whale Oil has now become a real billboard for the Free Speech Coalition.

It went up this afternoon in Auckland and, weather permitting, Wellington.

Stay tuned for the Tauranga special 🙂

The bottom line, if you can’t read it, says ‘Authorised as demanded by LabourFirst’s and the Greens’ outrageous assault on free speech by David Farrar of the Free Speech Coalition…”

I’m in Auckland to record the TVNZ7 show Media 7 about (what else?) political ads.

The recording was last night. It screens tonight at 9.30pm if you’ve got Freeview. Otherwise you can see it on the website.

We had great fun – ‘we’ being host Russell Brown, mayor/Labour president/ad-man Bob Harvey, political marketing lecturer Jennifer Lees-Marshment, and me.

It was my first TV programme outside of game shows, so I was a little nervous about the format. Would it be a lefty ambush?

If so, I was ready with my defence of Iwi/Kiwi (which I’ll blog some day).

But the reality was much more congenial.

Russell was a very fair host, Bob was great fun, and Jennifer I knew from having talked to her class at Auckland University in 2006.

The most openly partisan panelist was almost certainly me, as I couldn’t resist lampooning Clark’s outrageous ‘trust’ positioning.

But the producers seemed happy, and the audience laughed more than usual apparently. Producer Phil Wallington wants me to come back for a one-on-one some time over Christmas.

The programme is produced by Top Shelf Productions, whose owner Vincent Burke I recognized from my philosophy class at Vic in 1976.

While I’ve had a complete rearrangement of flesh and facial hair in the interim, Vincent’s still got the ginger pony-tail he had back then, and hasn’t changed a bit.

0
John Ansell
Create a free website or blog at WordPress.com.